It's been a while since Speed Wagon was on a road trip, so it was time to stretch it's legs. My wife and I took Speed Wagon to Midland, TX to see the Permian Basin Petroleum Museum and to see the Chaparral 2J run. The museum houses Jim Hall's collection of Chaparral sports racing cars and one of his Indy cars. Every couple of months or so, they pull one out and drive it around the circle in front of the museum. Yesterday, it was the 2J's turn.
Today, was the return drive to Oklahoma. Managed 20.7 MPG when I was on cruise at 71. Only 18.1 MPG when I bumped it up to 80. Not bad for a CTS V.
I've attached a couple of pictures of the Chaparral. 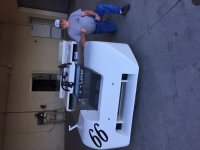 Chaparral 2J nose and yours truly. 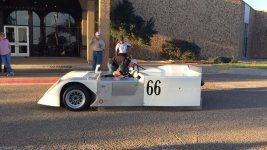 The 2J in front of the museum. 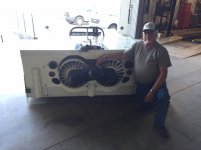 The "interesting" end of the 2J - 2 big ducted fans that suck the air out from under the car, thus sticking it to the ground. There is a snowmobile engine mounted above the transaxle that turns the fans. 2000# car, 2200# down force. You could park in on the ceiling and climb out if the engine stayed running!