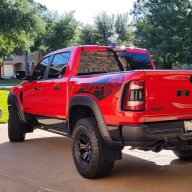 Even though I would love to have the luxury of Esky, this makes me cherish my Hellrango. 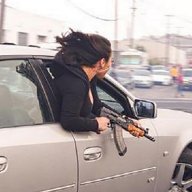 All of this results in the Durango having a much more 'sports car' oriented experience as it just handles immeasurably better than the Esky. I was at a track day and they let me take mine out for a few laps for shits and giggles. Although obviously not a track car, it was a blast driving it around and flinging it around corners, and the car didn't embarrass itself ... went in after three laps cause brakes weren't happy, they are not designed to take that sort of abuse. The dynamics for a vehicle of that size are fantastic, very much akin to an X5M Comp. I wouldn't even think to do the things I did with the Durango on track with the Esky ... it would either roll over or just plant itself into a tire wall.

Conversely the Escalade is a far superior vehicle in every technologic, luxury, interior design/ergonomic/design, metric. It can be quieter than the Durango but it can also be louder. The Durango is basically full on all the time, the Escalade can be dialed as per one's mood. It is also much more spacious. It is a much better daily driver overall. It is also almost $60,000 more expensive than my 2021 Durango.

The Durango Hellcat is a singular focus SUV, just go stupid fast with full whine and handle well on the way to CVS, all the other stuff doesn't matter much. The Escalade V is basically an Esky Platinum with a monster engine in it that I have to keep my garage door closed to cold start out of respect for anyone residing within a five mile radius.

I honestly don't know which one I like better overall. If the Durango had just a little more tech and had a nicer interior it would be no contest, because I do know I like driving the Durango more. I think because of that reason the Durango will age better and will be remembered more fondly in twenty years when everything is electrified. There's just something special about the idea of it. That's why I have an unregistered one mothballed to be taken out in 15 or so years to daily drive when everything is a toaster, something that I will also be doing with a CT5V BW. I have no inclination to do that with the Esky V.

All that said, the V is simply an overall superior vehicle to the Durango, almost as ridiculous and fast as the Durango but does a lot more things better, and in the present moment I cannot think of another SUV I would prefer daily driving.
cars 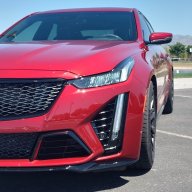