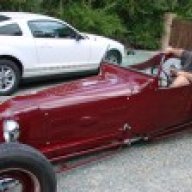 As the description for this off topic thread states, "to get to know the members better", I'll share my knuckle dragging, Neanderthal side.

First my green side, a Smart Electric.

My green crazy side, this death trap of a scooter can out pace my 'Vette to 40 mph.

And 30 years ago was still as goofy as grape juice.

Now you folks know a bit about me, others willing to share your automotive history???
Bob
516 lb/ft @ 2800
http://tbuckets.lefora.com/

I should have posted something to this thread a long time ago.

At 62 years old and the son of an auto mechanic, I've had a love affair with cars for a long time also. I don't that any pictures of the cars I had years ago, so I'll post a few "representative" pictures of some of my toys.

When I was a teen, my older brother had a '55 Chevy street rod that I got to drive. When I was in college, he bought an R/T Charger and handed me the keys to the '55 for a few months while he decided what to do with it.

It was a turquoise and white B210 2-dr coupe. Similar to this one: 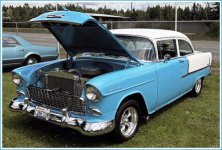 My senior year in college I bought a car with my own money - a '69 R/T Charger similar to this one: 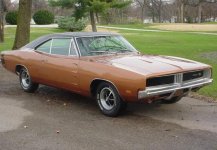 Basic 440 auto car. Mine had the brown vinyl roof. It started out with 3.23 gears but I swapped them for 3.90 gears. Also added a 6-pack camshaft to the engine.

Once in the Air Force, I found a '69 Road Runner for sale and bought it. It looked like this: 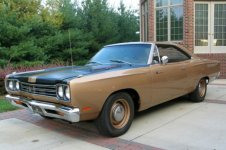 426 HEMI auto, bench seat, column shift, 3:54 Dana 60 gears. 13.7 in the quarter with street tires and through the mufflers. 12.2 with the headers open and slicks installed. Radar clocked at 162 MPH by a state trooper that was an old HS buddy. Kept this car for almost 12 years.

In the mid '80s, I bought a Grand National Buick Regal like this one: 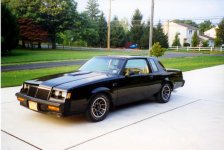 An '85 non-intercooled car. I added ram air and changed the computer chip to get 17 pounds of boost. Not as fast as the HEMI but it had AC and I could listen to the radio with the engine running.

As the big 40 got close, it was time for a new car - a sports car. Never really considered them until then. A Corvette was my ride of choice. Bought a '92 Vette. Here's a picture my wife had done for me: 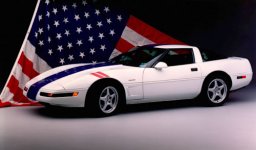 It was just white originally but my '96 I thought the GS scheme looked good and had my car striped and hashed. Added ZR1 wheels and GS flares later. Kept this car for 14 years.
Along the way, I married a girl that liked fast cars also and she owned a Corvette also - a basic white '93 but by the time we were married, she had traded up to a '98 Vette. So, we had 2 Vettes in the garage for many years.

My wife traded the '98 and bought a '96 CE LT4 Z51 Vette while I was still driving the one above. After she got the '96, I had to do something to make mine faster - I was tired of getting beat by her. So, the engine got a rebuild with LT4 and Hot Cam parts. About that time, we decided to replace her '96 with a 50th Annie Vette convertible.

The family car was a Buick Regal GS at the time the CTS V1 came out and I began talking about getting one of them. At first my wife wasn't that hot on the idea then she noticed an ad in the paper for an '04 V for just under $40G and I took a look at it that afternoon. Signed the papers and gave the dealer the GS that same day. Drove "DARTH V" home. 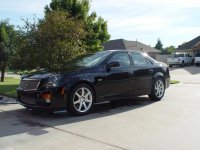 Kept this car for almost 7 years. 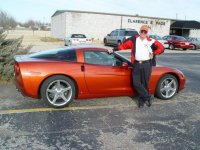 This is a paddle shift auto. Turns out that I wasn't having as much fun driving this as I had with a stick, so in '07, I told my wife that I was going to get a new Vette and sell the orange one. A friend really wanted my wife's 50th Annie car and my wife liked this car. So, we sold her car and I bought this '08 Vert: 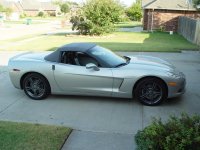 I had considered replacing the V1 with a V2 when they came out but there was one problem with the V2 - no fold down rear seats like the V1. I could not get our mountain bikes in the V2 sedan. In 2010, GM hinted that there might be a V Wagon and then it became clear that a V Wagon would exist. I talked with my Cadillac sales manager and the Cadillac regional rep.
Tuna
Ret. USAF Pilot
Ret. FAA technical writer
Mystery Writer

They made sure that my dealer got the first allocation of a V Wagon in OKC and I drove it home Pearl Harbor Day of 2010. Here it is: 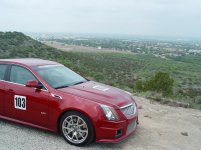 So, we've got an orange Vette coupe, a silver Vette vert and a red V Wagon in the garage. When the Volt started production, my wife wanted to check them out and them decided to sell her Vette and get the Volt. That was late 2011. In 2012, GM started hinting about the 60th Annie Vette. When they let out pictures of the new 427 Vert, white with silver/blue stripes, I showed it to my wife. She says we ought to get one of those. Talk to the Chevy sales manager and I get their first 2013 allocation for a 427 Vert. VIN is 00030. Now we have a Volt, a V Wagon and a Vette in the garage. Wife uses the Volt as her DD and I get a choice of 500+ HP cars to drive to work. Life's good.

In the Air Force, I got to play around with these single seat toys: 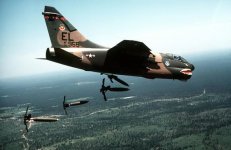 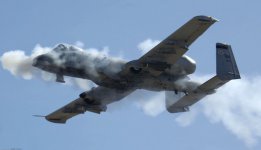