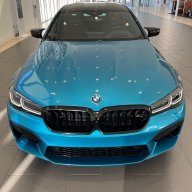 I should also mention that my Hendrick BMW dealer tried to stick me with nitrogen and nano ceramic tint and I was like yeah, no. They backed down easily enough but I'm not getting a huge discount so they'll still do well on the sale. I try to be fair.
D

SIX 40 said:
I should also mention that my Hendrick BMW dealer tried to stick me with nitrogen and nano ceramic tint and I was like yeah, no. They backed down easily enough but I'm not getting a huge discount so they'll still do well on the sale. I try to be fair.
Click to expand...

SIX 40 said:
That’s interesting, I’ve mentioned that in addition to this Blackwing I also have an M5 on order just in case I never get an allocation for the BW. The BMW dealer that I’m working with is a Hendrick store. They had an M5 CS which in case you don’t know, is a one year only very limited edition model with less than 500 being built (I think). I asked my salesman about it and how much over MSRP it sold for. He told me that “Mr. Hendrick doesn’t believe in ADMs” so it sold for list price.

Now that CS may or may not have sold at MSRP but it’s entirely possible that Mr. Hendrick does believe in ADMs after all

I guess Hendrick changed his mind. Back in 2004 when I was young and dumb I paid an ADM on the 2004 CTS-V they had in the showroom. I made back some of that on my wife's 1st BMW (but ended up using a non Hendrick dealer). For my 2009 V Hendrick were again jerks so I went with a dealer 40 min away that did MSPR less supplier discount with no hassle.
T

IMSA-01-fan said:
The Jim Hudson dealership in Columbia SC has it on display and said it was available. They stated it came from buying out a dealership in GA. 6 speed well loaded with a 60k ADM plus about 2k in dealer adds including tint and a first place finish car care system for 995 they claim is a ceramic coating worth up to 5k. Anyone have experience with this as they seem to be doing the same thing to my car tomorrow without even checking with me but back in Feb stated there would be no add-ons? Checking online gives mixed reviews but I know there is no way its a proper ceramic job.
Click to expand...