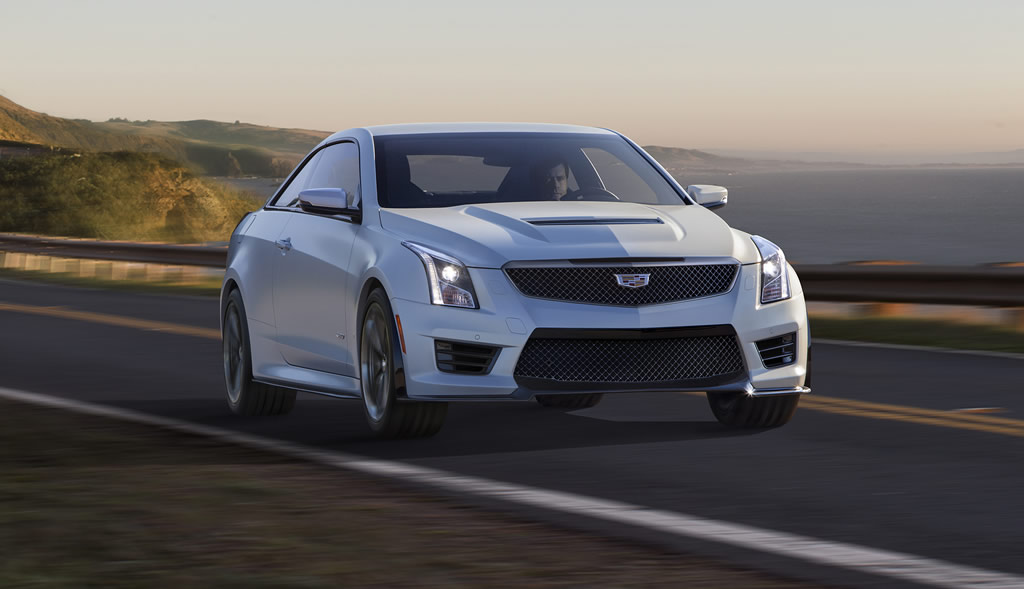 Available in sedan and coupe forms, the twin-turbocharged ATS-V offers a dual-purpose luxury performance experience: a car with true track capability straight from the factory with sophisticated road manners.

Powered by the segment’s highest-output six-cylinder engine – the Cadillac Twin Turbo rated at 455 horsepower (339 kW) and 445 lb-ft of torque (603 Nm) – the ATS-V achieves 0-60 performance in 3.9 seconds and a top speed of 189 mph. The Cadillac Twin Turbo engine is backed by a six-speed manual – with Active Rev Match, no-lift shifting and launch control – or a paddle-shift eight-speed automatic transmission featuring launch control and Performance Algorithm Shift.

“The V-Series is the ultimate expression of Cadillac’s re-ignited product substance and the passion at the core of our brand,” said Johan de Nysschen, Cadillac president.

“The ATS-V expands the V-Series lineup, bringing a new kind of performance character to Cadillac. Lightweight, agile and potent, the ATS-V will make an ideal pairing with the larger and even more powerful all-new 2016 CTS-V midsize sedan, which arrives later this summer,” he said.

In the U.S., the 2016 ATS-V sedan carries a starting price of $61,460 and the ATS-V coupe is priced from $63,660. Consumers can order ATS-Vs now through dealers and begin specifying their own ATS-V online at www.cadillac.com in April.

Additional performance technologies built into the ATS-V include:

An available Performance Data Recorder allows drivers to record high-definition video, with data overlays, of their driving experiences on and off the track, enabling sharing on social media.

More than just a desirable road car, the ATS-V will also become Cadillac’s entrant into the world of motorsports. Even before the new car hits the showroom, Cadillac Racing’s new ATS-V.R racecar will begin the Pirelli World Challenge GT 2015 season March 7-8 at the Circuit of the Americas in Austin, Texas. Cadillac Racing is the three-time defending manufacturer’s and driver’s champion in the series, which features legendary marques such as Audi, Ferrari and Porsche.

The ATS-V will be assembled at the Lansing Grand River assembly plant in Michigan.

The Cadillac Blackwing is Coming – But Not The Engine!