Techside of the 2016 Cadillac ATS-V

Magnetic Ride Control (some call it “magnaride” or just “MR”) will, also, be standard on the ATS-V. GM’s “third-generation” MR senses the road surface a thousand times per second, sending data to the magnaride control module. MR shock absorbers are filled with “magneto-rheological fluid” which flows through electromagnets inside the shock which are energized by the MR controller. The strength of the magnetic field varies the fluid’s flow characteristics and that changes the shock’s damping characteristics in near real time. MR can independently control all four dampers. Improvements in the third generation of the system enable MR to have 40-percent faster damping response. At 60 mph, “3G Magnaride” calculates the optimal damping force for every inch the car travels.

The car’s anti-lock brakes use Brembo six-piston calipers on massive 14.5-inch rotors in the front and four-piston calipers on 13.3-in. rotors in the rear. The ATS-V’s Performance Traction Management (PTM) system combines control of the eLSD, MR and the Brembo brakes and has five driver-selectable settings for stability-enhancement, traction control and antilock braking, including the segment’s only competition-level setting.

The tires on an ATS-V are Michelin Pilot Super Sports, 255/35ZR18s in the front and 275/35ZR18s in the rear. They are not Michelin’s “ZP” run-flat tires because Cadillac’s engineers decided the stiff, less-compliant tire casings required by run-flats were a compromise to the car’s track capability they didn’t want to make. In the event of a flat tire, a “tire inflation kit”, which comes in the trunk of all ATS-Vs, except those equipped with the optional “Track” package, is deployed to temporarily repair the tire. Wheels are forged aluminum, 18x9s in the front and 18×9.5s in the rear. The wheels are said by GM to be a lower-mass design aimed at reducing unsprung weight. Ok. That’s the ride-and-handing story.

Now let’s look at what makes the fun happen when you bury the gas pedal. The engine in this bad-assed little Caddy is a ulta-high-performance version of GM’s venerable, dual-overhead-camshaft, 3.6-liter, 60° V6. Not only does it have a pair of turbochargers, variable valve timing, direct injection and other performance features as does the LF3, the XTS’ full-sized sedan version of the so called “high-feature V6”, but parts of the engine package have been further performance-enhanced in the ATS-V’s new, LF4. 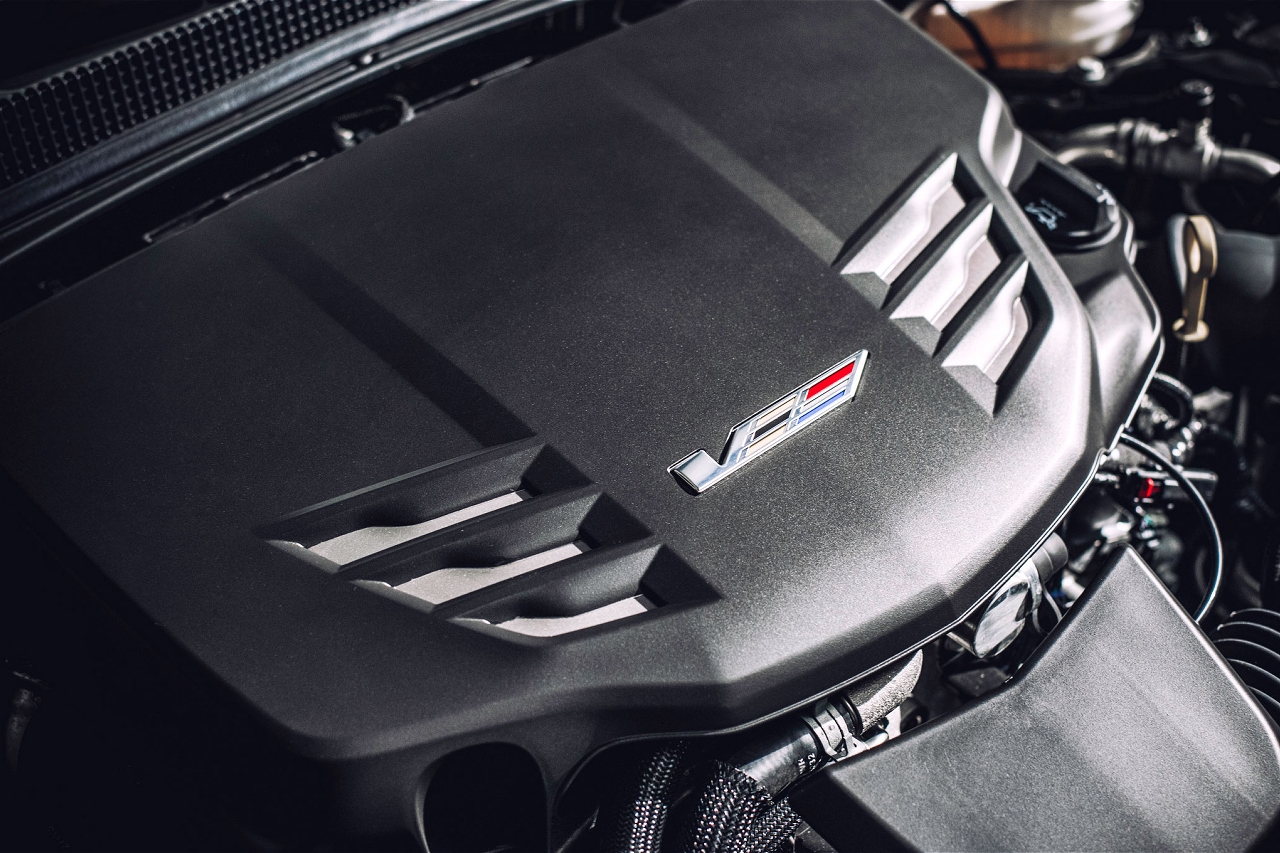 The cylinder block is common to both turbocharged three-sixes and was revised for the 2016 model year to improve crankcase bay-to-bay breathing and reduce oil windage. It has piston oilers aimed at the bottom of the pistons to help cool them. It has connections for oil and coolant drainback lines from the turbos. For Caddy’s “pocket-rocket application”, GM Powertrain ripped a page out of the Corvette LS7 book and swapped the standard powdered-metal connecting rods for forged titanium rods. Parts made of titanium have less mass and the advantage of that in a con rod is two-fold: 1), less reciprocating mass allows the engine to rev quicker and 2) it reduces the load on the oil film between the rod bearings and the crankshaft journals when the engine is at high rpm. Though all turbo 3.6es have forged steel crankshafts, the lighter rods required a new crank forging with altered counterweights to compliment the Ti rods. The LF3/4 pistons are cast, eutectic aluminum but have a steel insert for the top ring land and a machined top. In direct-injected engines, the piston top can be used to direct fuel spray from the injector. The piston tops in LF3/4s have “centrally-located dishes” for that purpose. Compression ratio is 10.2:1. The engine’s oil pan has a revised baffle assembly and oil pickup which ensures consistent oil pressure and flow during the high-g cornering ATS-V drivers will be able to enjoy.